20 Valve engine is increasing in popularity as the choice of engine in rear wheel drive conversions in cars such as the AE86. However it does have some extra issues involved over a 16V in converting it to run in a north-south direction. The general conversion steps are listed that are shared with the 16V and of course the problems that are particular to the 20V engine. 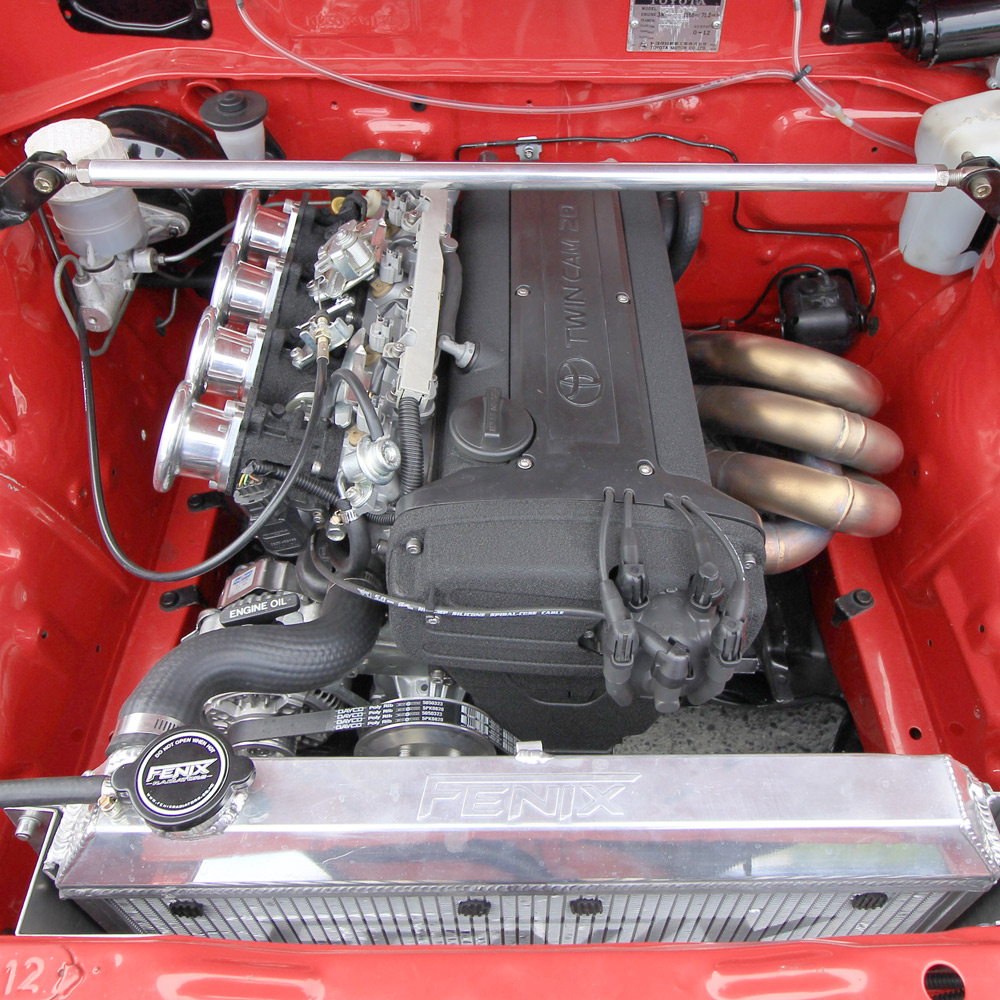 Parts checklist – For a complete list of parts that we can offer for this conversion – please see here.

For AE86 and AE71 cars that came standard with a 4AC or a 4age 16V the original mounts, gearbox and crossmember will also suit all of other A-series Toyota engines such as the 4age 20V. For the KE70 it is however more difficult as it needs to have the clutch converted to a hydraulic unit, new engine mounting and a different gearbox installed. To convert to the hydraulic clutch mechanism a different pedal box, clutch master cylinder, metal clutch line, flex line and slave cylinder need to be fitted. To make the mounting compatible the cross-member, gearbox, gearbox mount and rear half of the tail-shaft all need to be changed. Luckily all of the needed parts can be sourced out of either an AE71 or AE86 for the required conversion, although these are sometimes hard to find and hence sold for rather high prices.. It is of note that the AE86, AE71 manual and automatic engine crossmembers are all identical.

Both of the 20v engines feature air-boxes with an inlet facing to the rear of the engine, these aren’t compatible with a Rear wheel drive(RWD) installation. With the use of different velocity stacks and modifications it is possible to make one of these original airboxes work, this however is a particularly difficult job in a right hand drive car.

The most common route is to completely remove all of the airbox and fit new velocity stacks and a with a combined or four individual filters. More on these options further down.

Please see the article ‘Intake Tuning for multiple throttles‘ for more advanced information on this subject.

Even if the factory fitted velocity stacks could be used (which they usually can’t) they are highly restrictive and not at all suggested. We offer both Silvertop and Blacktop stacks in our store.

The single best all round velocity stack length for 4age engines is 100mm. All other factors ignored there is no benefit of going shorter than this length. Fitting something like a 75mm length will not give more power in the upper end. However it is quite often a necessity to compromise this due to physical clearance. For example an AE86/AE71/KE70 the limiting factor is the clearance off the brake booster. A 70mm velocity stack can be fitted but this leaves no room for any type of filtration. The suggested solution is to then run a 50mm length with a slide on filter with an internal spring. It’s not an ideal solution however it is cheap and easy.

WARNING: There are some very cheap velocity stacks on ebay, while some actually look good all of the ones we have seen are of a very poor quality. Issues include failures from poor materials / construction methods, poor upper inlet transitions and “universal” sizes. On this last point Silvertop and Blacktop engines have different opening diameters, this means a part may have slotted holes mounting holes to suit the two different types but it can’t have two different internal diameters, the result being that there will be a nastly step left over the transition which will hurt the performance. Also don’t be fooled by these identified as “TODA” on Ebay, they most certainly are not from them. 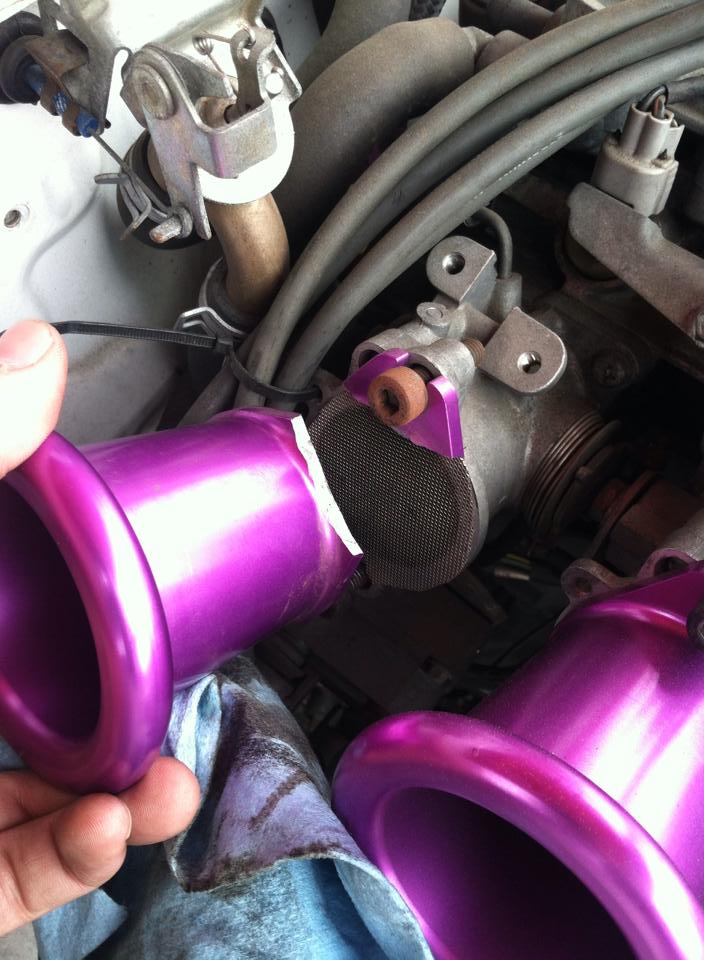 A failure of a nice looking but cheap and poor quality velocity stack.

Please see the article ‘Intake Tuning for multiple throttles‘ for more advanced information on this subject.

In terms of performance nothing beats a well designed airbox, however this out of reach of most. Another factor that can been seen as either good or bad is in regard to the intake noise. An airbox will almost completely eliminate the classic 4age induction roar. Those who are running an original 20V Silvertop ECU will need to still run the matching airflow meter. This means an airbox is the only option. Other airbox options is using one of our Nissan GTIR adapters, or an aftermarket airbox from Mekaru. Note: the airbox from Mekaru unless glued shut will not seal off well enough to be compatible with the Silvertop airflow meter

If no airbox is to be used then it’s a filter or filters directly to the intake. A solution that is commonly used is to have have individual filters slid over the velocity stacks. The issue with these type of filters is that they are all quite restrictive. The type with an internal spring do have less but it’s still considerable.

WARNING: An engine should never be run for more than a short time without any sort of filtration. Steel mesh screens are also pretty much pointless as they will only stop particles that would be too bulky to even make it to the engine in the first place.

On an AE86/AE71/KE70 the limiting factor is the clearance off the brake booster. A 70mm velocity stack can be fitted but this leaves no room for any type of filtration. The suggested solution is to then run a 50mm length with a slide on filter with an internal spring. It’s not an ideal solution however it is cheap and easy.

Those with LHD cars can not only run the ideal 100mm length of velocity stack but also have a very effective filtration option that is reliable and not restrictive. A PX600 (Part # C6004) filter from Pipercross can fitted to the 20v throttles with an adapter, we have these Pipercross adapters, ITG filter adapters (only suit shorter stacks) and the matching velocity stacks available through our store.

All 4AGE engines have the same exhaust port position and only the 20v engine has a difference with the mounting face. That difference being that on the 20v the two outer holes are place further outwards that its 16V equivalent. With the 20v engines readily gaining popularity off the shelf extractors are now much more common than previously. However 4AGE 16V extractors can easily be adapted to suit and vice-versa. To adapt from 16v to 20v extractor flanges the most common way would be to extend the flange outwards on the two extreme edges with a similar material and re-drill the flange. Another less preferable option would be to shave the outer edges of the flange and then use large washers to hold the flange in place with the outer bolts. Using this for-mentioned method it is possible to use the cast iron manifold off a Trueno.

From the headers onwards the exhaust system would be to the same specifications as that of a 16V engine. With that being 57mm (2.25 inch) as being the most accepted size for power for the majority of applications. The piping then ideally using mandrel bends where needed and the choice of mufflers/resonators/catalytic converter/etc.. depending on the owners personal preference.

For AE86 and AE71 equipped cars that came standard with 4AC powered engines the original throttle cable is too short. In a right hand drive install the cable sourced from a KE70 Corolla has the extra length to loop around the front of the engine and hook up to the original throttle linkage.

Unless intended for a very low budget race only car the firewall should never be modified to suit the cooling system or the ignition system with a 20v conversion, there is no need with the right components. The original 20V distributor is located on the rear of the cylinder head and rarely can installed into almost all north-south engine bays because of the clearance required. There is however enough space in most applications to leave the base of the distributor and fit a blanking cover. Doing so leaves all the original electronics / cam angle sensors in place. From here the main methods to overcome this problem are shown below.

Distributor cap relocation kit: For those who wish to utilise the original 20V ECU then this is the only suggested option. With only the high voltage side of the ignition system altered all other electronics are used as they where designed.

Individual coilpacks / coil on plugs / COPs: Using the four individual coils from either a 1ZZ-FE or either of the NZ series engines this negates the need for any ignitor(s), spark plug leads, distributor cap and a rotor button. This is not at all suggested when using the original ECU. For extensive information please see our Coilpack information guide.

Multiple coils: The only downside of running the coilpack method as listed above is that the original plastic belt cover can’t be fitted back into place, that is unless it’s modfied for clearance and cooling. So for those who wish to have an original but very neat looking engine there is the option of still using some spark plug leads but with two or four coils mounted away from the engine. A waste spark system is used with twin coils or one coil for each cylinder. A common and reliable choice is the coils from a Holden / GMH LS1 engine. These do however require to be powered with by separate ignitors and will not work with the original 20V ECU.

Fuel hoses: If a vehicle originally had an engine fitted that wasn’t fuel injected then the whole fuel system is only designed for low pressure use. This means that it’s a necessity to replace all of the rubber fuel lines from a low to a high pressure type and use compatible clamps to suit. Using the original rubber lines and / or clamps is a recipe for disaster as they are not designed for the higher pressure. This means that the fuel tank will need to be removed for access.

Fuel surge: The second issue is that the fuel tank will likely not have any internal baffles / cup inside. This is needed because under G-force the fuel can move away from the pickup. Whilst carbies have internal floats and a function that inherently allows for these fluctuations to some degree, EFI fuel systems definitely do not. Such a starvation immediately causes air to be sucked in through the line, the fuel pressure to drop and then a potentially dangerous lean out condition. If the vehicle being converted was available as an option with EFI then it’s as simple as swapping the fuel tank across, this also solves the fuel pump issue. An even more reliable method and one that works for all vehicles is to run a low pressure section pump into a surge tank and a second pump as a high pressure output. Note: Surge tanks are not suggested to be installed inside a cars cabin due to safety reasons.

Fuel pump(s): Unless an EFI compatible tank and it’s internal pump is fitted as mentioned above then a high pressure pump is required. These can be either fitted externally or a proven option is modify the original fuel pickup to hold a pump inside the fuel tank.

NOTE: Some external pumps such as the often used model from a Holden VL are not designed to be able to provide any significant suction force. These should either be fed with a separate section pump or be mounted level with the bottom of the fuel tank.